This is an extract of the original blog.

Thousands of articles will appear.

So, why can we credibly claim that the cold calling tips in this article are the best ones you’ll ever read?

They are based on real data, not intuition.

At Gong.io, we have the largest database of recorded sales calls in the world.

We’ve analyzed this database of sales calls with AI to understand what’s actually working during sales conversations (and what’s not working).

At the time of this writing, over 100,000 of those are outbound, connected cold calls.

We analyzed those calls with natural language processing to identify a slew of data-driven cold calling tips.

Successful cold calls were defined as those that ended up in a held follow-up meeting.

To maximize the accuracy of the insights, we filtered out “no answer” and IVR calls.

Here are the 14 cold calling tips we’ve uncovered from analyzing over 100,000 of them with AI.

There’s an important rule of thumb for any cold caller:

Once you make a connect, you have 5 seconds to earn 5 minutes.

And once you earn 5 minutes, you use that time to earn an hour.

The longer the call, the greater your odds of getting the meeting: 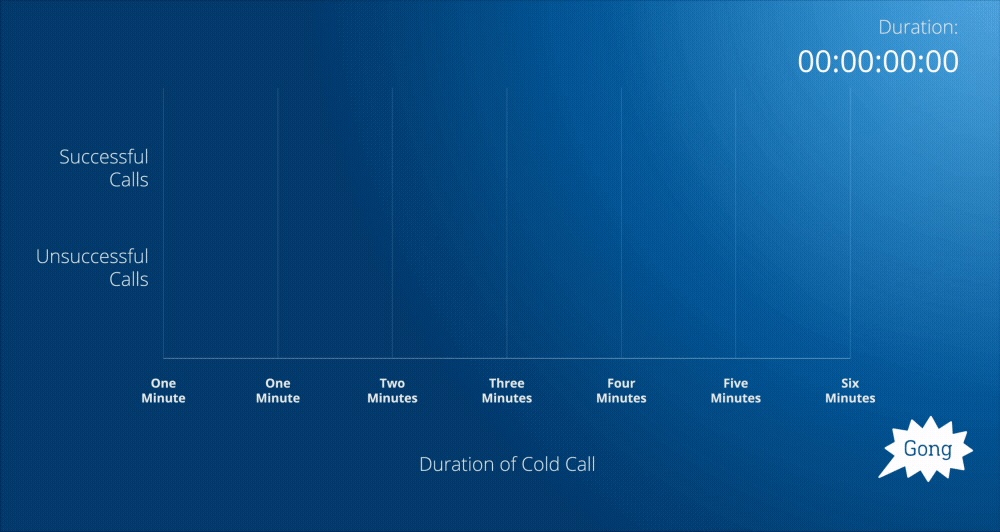 In short, not only are you calling to get your prospect’s attention – you’re trying to hold it, too.

However, cold calls are at constant risk of being ended prematurely by the buyer.

You need to say something interesting straight out of the gate.

An easy way to do this is to steal John Barrows’ favorite introduction for opening cold calls.

After introducing yourself, start every cold call with this line:

As John points out, if you cannot finish that sentence, you should not be making the call.

From there, know the exact paths your buyer could go down and have a response to each of those.

Every sentence should be scrutinized with these two questions:

Does it keep the buyer on the phone?

Does it progress the conversation?

Putting your cold calling tips, tricks, and routines under this microscope makes you become much more intentional about what you say.

And the better you can map out the answers your prospect might have, the better prepared you will be.

You may have been born with two ears and one mouth, but that doesn’t always mean you should listen twice as much as you talk.

Especially when it comes to cold calling.

Cold calling isn’t about discovery – it’s about selling the meeting.

In fact, the talk-to-listen ratio for successful cold calls is actually higher (more talking, less listening) than unsuccessful ones: 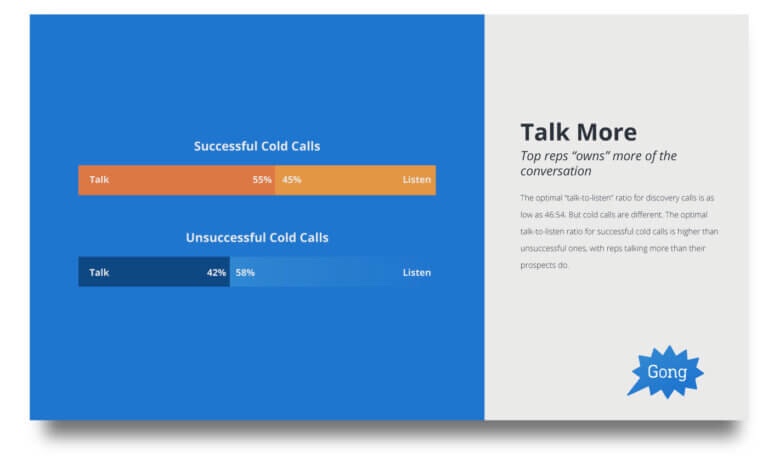 Because you need to educate and inform the buyer straight out of the gate, top reps “own” more of the conversation than in other types of sales calls (such as discovery).

It’s your job to take this time and sell them on why they should attend the meeting.

Have you ever tried asking “What are your top priorities…” at the outset of a cold call?

You probably didn’t receive much of an answer.

Counterintuitively, we found that successful cold calls involve longer (not shorter) “monologues” from the sales rep:

The average “longest rep monologue” in a successful cold call is 37 seconds.

This proves that one of the top cold calling tips in your arsenal is you have to earn the right to ask questions.

Otherwise, your selling sequence is unlikely to go well.

Pitching the wrong way is a very common mistake made on cold calls.

If you launch into their pitch way too early, you’re likely to have no understanding of what the prospect actually wants.

Instead, the winning cold calling tip is crafting a highly personalized pitch for why the buyer should agree to a meeting.

You only have seconds to convince your prospect you’re worth their time, so come armed with a pitch that is short.

Offer a positioning statement that shows you work with customers like them and understand their pain points.

With this, you’re setting yourself apart from other cold callers by not talking about yourself.

Try something like, “I work with marketers for SMB companies. My customers are typically looking to increase MQLs without spending a ton of money. Does that sound like you?”

Since you’ve already pre-qualified them, you’re guaranteed a “yes” and can then ask them to tell you more.

We’ve covered a lot of cold calling tips for you as a sales rep.

So, what should be going on in your prospect’s mind?

The average prospect monologue length (how long you can get the prospect to talk uninterrupted) in successful cold calls is only 3.5 seconds. 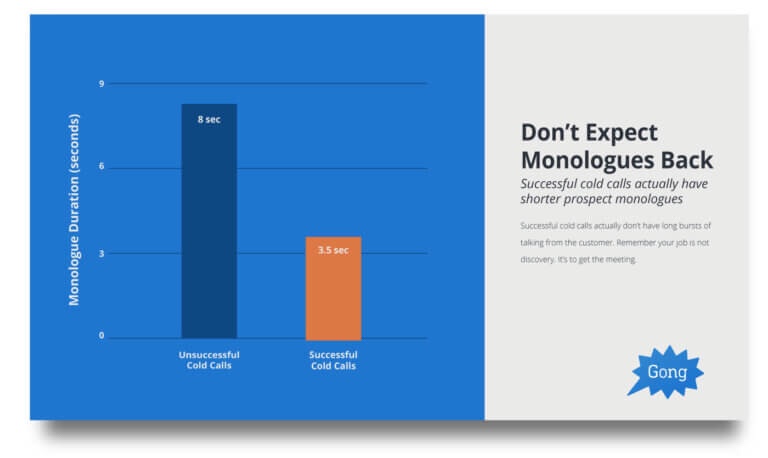 As we mentioned earlier, the job of a cold call is to sell the meeting.

And to make a great pitch, a few wisely-placed discovery questions might help.

Intelligent pre-call research combined with a few economical questions is your best bet for getting there.

A strong sign that a cold call is going well (and that you have good discovery questions) is the rate of back and forth discussion.

While your cold call will likely start off heavy on the monologues, back and forth between you and your prospect should gradually accelerate as the call progresses.

In other words, effective cold calls begin as a pitch and slowly evolve into back-and-forth dialogue.

In successful cold calls, there are 77% more “speaker switches per minute” than those that are unsuccessful:

Here, you know you’ve educated the customer enough (in a super short amount of time) for them to engage you in a strong dialogue.

They have questions you’ll need to answer

They have objections you’ll need to overcome with objection handling techniques.

And they want to know more.

Cold Calling Tip 6: Never Ask “Did I catch you at a bad time?”

This is one of the most common questions new reps use to open a cold call.

In fact, most sales books even recommend trying it out.

Here’s the theory behind it:

People like to say “no,” so they can feel in control.

It opens the door to a successful cold call.

According to recent data, this opening line has proven to have a shelf life.

Compared to the baseline, using “Did I catch you at a bad time” to open a cold call makes you 40% less likely to book a meeting:

Cold calls that opened with this line had a dismal 0.9% success rate (compared to the 1.5% baseline).

So, if you shouldn’t do what the textbooks tell you – what’s a better way to get and hold your prospect’s interest?

We have a few ideas…

Most cold calling tips tell you to avoid asking this.

But opening your cold calls with some version of “How are you?” correlates with a 3.4X higher likelihood of booking the meeting compared to the baseline:

Cold calls that opened with this line had a 5.2% success rate, compared with the 1.5% baseline.

Plenty of sales pros argue that this question sounds inauthentic.

But if you think about it, sales professionals nitpick over this stuff much more than your buyer will.

Sure, a sales professional may be critical of you for using that line – But CFOs? CTOs? VPs of Operations?

It’s likely they won’t even think twice about it.

Asking “How are you?” is nothing more than standard social behavior.

But it’s important to remain authentic (not robotic) when you ask it.

Cold Calling Tip 8: Start With “The reason for my call is…”

John Barrows was right about this one.

Beginning with a proactive reason for your call increases your success rate by 2.1X: 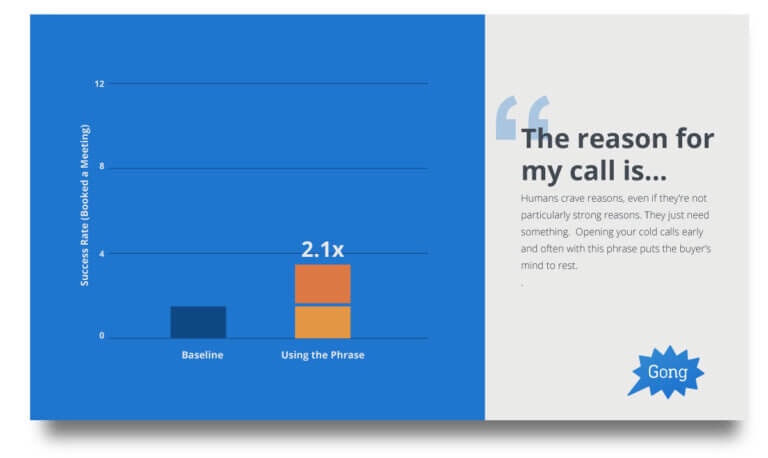 Humans want reasons, even if they’re not particularly strong reasons.

Using this cold calling opening line early and often with this phrase puts the buyer’s mind to rest.

Keep in mind, this line is not exclusive to the others.

Think of it more as a “given” on your cold calls, pairing it with other tactics to boost your success rates.

In our dataset of 90,380 cold calls, one opening line stood head and shoulders above the rest:

“How have you been?”

It came in at 6.6X higher success rate than the baseline:

But was the success rate was high because of a previous interaction?

Not the case – this data set was exclusively first interactions (hence the term “cold call”).

So, why does this question work so well?

It’s an unexpected, pattern interrupt that scrambles the prospect’s brain in a good way.

Even if you’ve never talked to the person before, you can plausibly ask that question to a perfect stranger.

Sure, it may sound like you’ve met before, but it’s not automatically implied.

Winning cold calls involve more time devoted to discussing “Next Steps” at the end of the conversation.

In fact, in some of the most successful cold calls we looked at, “Next Steps” consumed about half of the conversation. 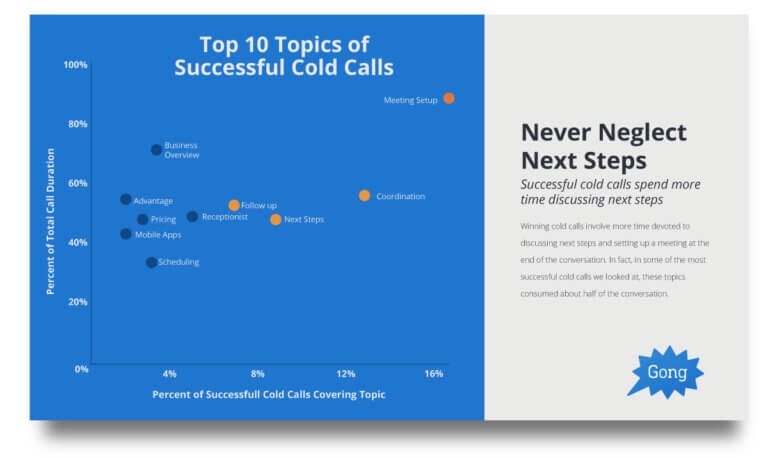 Reps who consistently struggle with converting deals to the next stage simply run out of time at the end of the call.

Or, they haven’t done enough at the beginning of the call to keep the prospect engaged and on the line.

This ensures you have plenty of time to work through what a next step looks like in a calm, unrushed manner.

And when you’re reaching out to a prospect for the first time, consider yourself to be the biggest team player of all.

Cold calls that include collaborative language are generally more likely to result in follow-up.

Along with “we” and “our,” successful cold calls also incorporated collaborative words like “ourselves,” and “us.”

According to InsideSales.com, Wednesday and Thursday are (and have been for years) the best days of the week to call prospects:

This shouldn’t be completely surprising.

Mondays are for transitioning back into work mode after the weekend and planning the upcoming week.

Fridays are usually spent gearing up for the weekend, so a lot of buyers aren’t interested in starting a new relationship with a salesperson.

However, Wednesday and Thursday leave room for those that are settled into their work week and won’t feel like your call will be an interruption.

Cold Calling Tip 13: Make Your Calls at These Times

Most reps think the earlier in the day you cold call, the better.

You can connect with prospects before their day becomes too busy.

When you think about the typical day at the office, you realize at 4:00 p.m., they’re winding down for the day. Similarly, at 11:00 a.m., most people are wrapping up tasks before taking lunch.

In turn, your prospect is likely hesitant to start a new task, which makes it the perfect time to take a phone call from you.

Heading to the office, which makes these hours the worst during which to make calls.

Most businesses open between 8:00 a.m. and 9:00 a.m., which leaves uncertainty about whether anyone will be there to answer your call.

And for anyone just getting in, the first hour or two of the day is spent organizing and resolving immediate requests.

However, you shouldn’t hold out hope that you’ll reach a decision maker earlier or later in the day.

Those that are up with the sun probably went in early to work without distraction, making them less likely to pick up the phone.

The same goes for those night owls that are in the office late.

The more telephone dials that you make, the more contact more prospects will have.

And as a result, the more opportunity for sales.

InsideSales.com recommends that you always make at least 6 call attempts:

Persistence is something that you learn and following these cold calling tips gives you that opportunity to become even more persistent.

And at the end of the day, persistence is core trait of any successful salesperson.

Like we said, the Internet is full of cold calling tips.

Some good, some bad.

But you can bet on one thing:

Every cold calling tip in this post is based on real data.

Now, get back on the phones 🙂

Sign up to receive sales stats, data, and insights that will help you drive quota attainment across your team.